"If You Want My Body", by Casanova Hamster


There are two songs that I’d like you keep in mind while reading this story, and when I say 'GO' you must promise to quietly hum the song to yourself, or sing it out load if you are in a place where NO ONE will be disturbed by the fact that your singing off key, or recognize that your tone-deaf.
The first, is the 1978 classic, “If you want my body” by Rod Steward.
'GO - BODY' (start humming)
"If you want my body, and you think  I'm sexy, come on, sugar, let me know"
Now STOP!
And the second, is the ever popular “She’s a Maniac” by Flashdance, one of the many songs that it is nearly impossible not to dance to.
'GO - MANIAC' (start singing)
"She's a maniac, maniac, on the floor, and she's dancing like she's never danced before"
Now STOP!
Lastly, I must ask you readers, to remember that time when you felt Most desirable and Undeniably sexy. Think of what you were wearing, your facial expression, the scent of your cologne or perfume, and the unforgettable surprised look, on the face of your mate, when you stepped into the room. 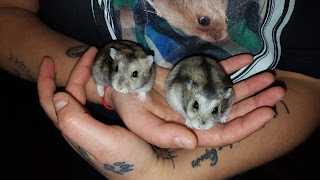 Do you have your image?……......GREAT! Now replace that image of you as a human, with you as a hamster.
Men of the human species, are always ready to have sex, and in the hamster world, the equally comparable testosterone levels drive the males to the same brink of insanity.
And in either case, when the woman says “I’m not in the mood”, the men are not DIScouraged, but rather ENcouraged to try harder to win her affection, so that she will ultimately change her mind.
Ladies, be aware, that instead of deterring him with your words, you have single handedly given his ego the power boost it needed to act fast, and show you that your indifference is only temporary, and what you REALLY want is to be.....persuaded.
So now the man has to act quickly before the window of opportunity is SLAMMED shut, Locked, and the key, which metaphorically represents his chances, slides onto the key ring, and disappears amongst all of his other failed attempts. He must convince her thru acts that show off his masculinity, that he is IRRESISTIBLE, and that she not only Wants, but Craves his body.  And if you’re a hamster, you can’t just buy a bracelet from Tiffany, or take her for a drive in your Ferrari, but you CAN.....choose to work out. 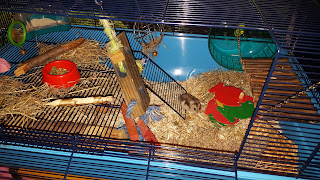 1st, he starts with the warm up, which consists of running around 10 times in small, concentric circles.
2nd, he advances to sprinting 20 laps around the lower floor of the cage, stopping only for a moment to take a few sips of water. 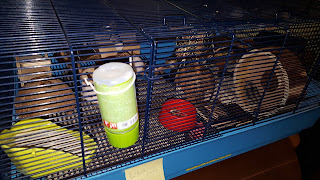 3rd, he heads to the spinning wheel, running at full speed, until the maximum rotations per minute are equivalent to that of tires on the highway.

4th, he jets up the ladder to the second floor to sprint 20 more laps around the cage.
5th, he jogs back downstairs to finish off his work out with a cool down, running at a low speed on the spinning wheel.
And all the while that he’s driven to complete this mission, and his beloved it watching him work up a sweat, he’s convinced that his plan is working, and she in fact, Now, Wants his body.
'GO - BODY' (start humming)
"If you want my body, and you think  I'm sexy, come on, sugar, let me know" 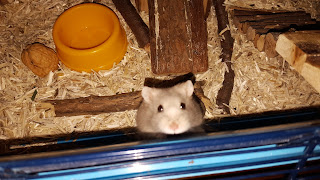 So as it’s been approximately 5 minutes since this whole ordeal began, and Monsieur Casanova Hamster has finished his..... “Massive Workout”, he struts back over to her -- exuding confidence with every stride -- and turns to her with love in his eyes that plead “Honey....Are you ready yet?” She takes one sniff at him......snarls......snaps, and like a typical male he just figures that she’s playing hard to get, and goes off to do another workout. 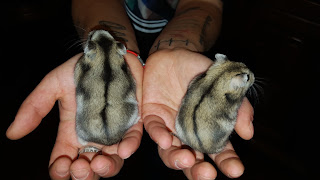 'GO - MANIAC' (start singing out loud)
"She's a maniac, maniac, on the floor, and she's dancing like she's never danced before" 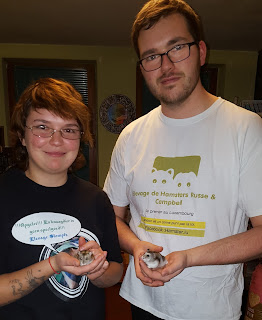 Hamster.lu is the 1st Hamster breeding, rescue, and adoption foundation in Luxembourg. The founders were originally part of an organization in Brussels, but after being relocated to Luxembourg, found that no such organization had been established, so they took the initiative to start their own in 2013.  They specialize in breeding certified pedigree Russian Hamsters, but are experienced in handing various kinds, as well as other types of rodents. At the moment they personally care for 5 hamsters, two of which are intended to breed in the coming weeks. They also assist with finding forever homes for unwanted pets by adopting them out. This April, the founders will attend the Houten NL Exoknaag conference in The Netherlands to showcase their pedigreed pets as well as search for additional reputable mating partners. For more information contact them via Facebook.
Posted by Unknown at 10:07 AM